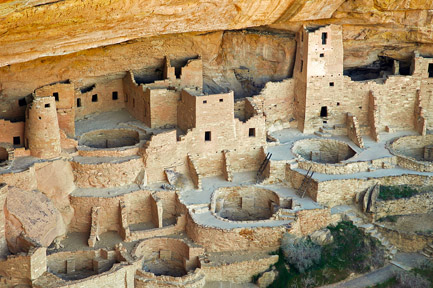 The Mesa Verde is considered to be the site of the prehistoric Ancestral Puebloan culture and offers a spectacular look into the lives of the Ancestral Pueblo people dating back from 600 to 1300 A.D. Today the park contains more than 4000 archeological sites including 600 cliff dwellings of the Pueblo people and the mesa top sites of pithouses, pueblos, masonry towers, and farming structures. These are the most remarkable and incredibly well preserved sites in the United States.

Mesa Verde is well known for a large number of well-preserved cliff dwellings, houses built in shallow caves and under rock overhangs along the canyon walls. Primarily living and farming on the mesa top, many Ancestral Puebloans began living in pueblos they built beneath the overhanging cliffs. The structures ranged in size from one-room storage units to villages of more than 150 rooms.

These cliff dwellings of Mesa Verde are some of the most remarkable and incredibly well preserved. Many well known cliff dwellings in the park include Balcony House, Cliff Palace, Long House, Spruce Tree House, and Step House. Some of the mesa top archeological sites in Mesa Verde National Park are Badger House Community, Cedar Tree Tower, Far View Sites Complex, and Sun Temple.