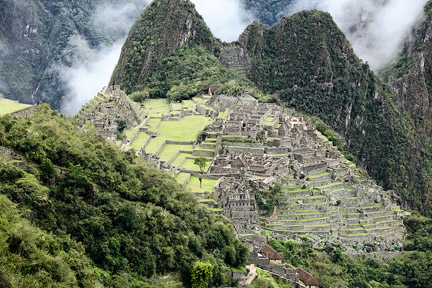 Machu Picchu which means "old peak" is the site of a pre-Columbian 15th-century ancient Inca city that is situated high in the Andes Mountains of Peru. It is situated at 2,430 meters (about 7,970 feet) above sea level on a mountain ridge above the Urubamba Valley in Peru, which is 80 kilometers (50 miles) northwest of Cusco and through which the Urubamba River flows.

A visit to Peru will be incomplete without it. It is the end point of the most popular hike in South America: the Inca Trail. This ancient site is the most visited tourist destination in Peru. The site was voted as one of the New Seven Wonders of the World.

Ancient ruins of this ancient Inca city are one of the most outstanding and spectacular ruins in the world. These remarkable ruins were only rediscovered in 1911 by the American historian Hiram Bingham who was a lecturer at Yale University.

Archaeologists think that this amazing site was built as an estate for the Inca emperor Pachacuti (1438–1472). It was built around 1450, at the height of the Inca Empire. It was abandoned just over 100 years later, in 1572, as a late result of the Spanish Conquest. Over the centuries, the surrounding jungle grew over much of the site, and few outsiders knew of its existence. It is still unknown exactly what the site was in terms of its place in Inca life but it was obviously a remarkably well hidden and well protected place.

Current researchers tend to believe that this ancient site could have been like a country resort for elite Inca people. Scholars believe that Machu Picchu to be a sacred religious site mainly because of where Machu Picchu is located. Theorists think that the site was chosen because of its position relative to sacred landscape features such as its mountains, which are supposed to be in alignment with key astronomical events significant to the Incas.

Machu Picchu was built in the classical Inca style, with polished dry-stone walls of regular shape. The Incas used blocks of stone that are cut to fit together securely without using mortar with fine craftsmanship. Since Peru is a highly seismic land, mortar-free construction was more earthquake resistant. Many joints in the stone blocks in the central city buildings are so perfect that it is said not even a blade of grass fits between these stones.

Ruins at this ancient site show that Incas actually flattened the top of a high mountain to build a city comprising of more than hundreds buildings with an agricultural production area, irrigation system and other facilities. There are more than one hundred flights of stone steps often completely carved from a single block of granite and numerous water fountains. These were interconnected by channels and water-drains perforated in the rock that were designed for the original irrigation system.

The ancient ruins are divided into two main sectors known as the Urban and Agricultural Sectors that are divided by a wall. The Agricultural Sector is further subdivided into Upper and Lower sectors, while the Urban Sector is split into East and West sectors which are separated by wide plazas. According to archaeologists, the urban sector of Machu Picchu was divided into three great districts: the Sacred District, the Popular District to the south, and the District of the Priests and the Nobility.

The three most important buildings in the Sacred District are the Intihuatana, the Temple of the Sun, and the Room of the Three Windows. These were dedicated to Inti, Inca’s sun god and the greatest deity. The Popular District, or Residential District, is where the lower-class people lived and it includes storage buildings and simple houses. The royalty area for the nobility has a group of houses located in rows over a slope; characterized by its reddish walls, and had trapezoid-shaped rooms. The Monumental Mausoleum is a carved statue with a vaulted interior and carved drawings that was used for rites or sacrifices.

Intihuatana is translated as the 'Hitching Post of the Sun' and it refers to the carved rock pillar which stands at the top of the Intihuatana hill. The Inca's astronomers were able to predict the solstices using the angles of this pillar. It is unclear exactly how the pillar was used for these astronomical purposes, but its elegant simplicity and high craftsmanship make it a best part of the complex of these ruins.

The Temple of the Sun is a Machu Picchu's only round building and a curved, tapering tower that contains some of Machu Picchu's finest stone masonry. It is astronomically aligned and could have been used for astronomical purposes. Inside are an altar and a remarkably drilled trapezoidal window that looks onto the site.

The House of the Terrace Caretaker and Funeral Rock provides the famous and very photogenic view over the ruins of Machu Picchu. The Principal Temple has perhaps the best stone masonry work. The stones of its three walls are accurately cut and then fitted together without mortar. The Temple of the Condor is built in the shape of a condor, the Inca symbol of heaven. Stunning views from the north side of Machu Picchu can be had from Wayna Picchu, a mountain peak that overlooks these ruins. 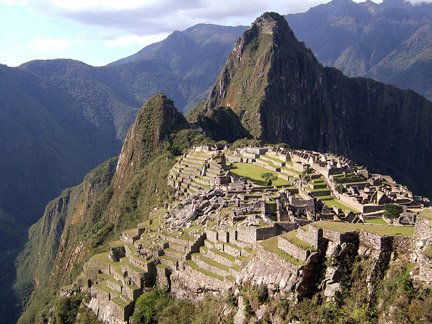