This ancient site was visited several times by western explorers and missionaries between the 16th and 19th century, but it is Henri Mouhot, a French naturalist and explorer of the mid-19th century who is popularly credited with its ‘discovery’ of Angkor Wat in 1860. This discovery of these ancient temples in 1860 opened up this lost civilization to the world.

It is one of the largest of Khmer monuments is located six kilometers north of Siem Reap. Built around the first half of 12th century by King Suryavarman II, the temple's balance, composition, and beauty make it one of the finest monuments in the world. The name literally means ‘City Temple’. It is the best-preserved temple and is the only one to have remained an important religious center since its foundation; first Hindu, dedicated to Vishnu, then Buddhist.

The temple is the epitome of the high classical style of Khmer architecture. This magnificent temple combines two basic plans of Khmer temple architecture; the temple mountain and the later galleried temple, based on early South Indian Hindu architecture. Constructed within a moat and an outer wall 3.6 kilometers (2.2 miles) long with three rectangular galleries, each raised above the next, it is designed to represent Mount Meru, home of the devas in Hindu mythology.

This temple is oriented to the west. At the center of the temple stands a quincunx of towers. The temple is admired for the grandeur and harmony of the architecture. This temple features the longest continuous bas-relief in the world, which runs along the outer gallery walls, narrating stories from Hindu Mythology.

Angkor Thom is also a very popular tourist destination as Angkor Wat. Angkor Thom means ‘Great City’. It was constructed in Bayon style in the late twelfth century to early thirteenth century by King Jayavarman VII. This site is situated 1.7 km north of Angkor Wat, within which are located numerous monuments from earlier eras as well as those established by Jayavarman and his successors. The fortified city of Angkor Thom, about 9 square km in extent, was the last and most enduring capital city of the Khmer empire built by Angkor’s greatest King, Jayavarman VII (ruled 1181-1201).

Centered on Baphuon, Angkor Thom is enclosed by a square wall 8m high and 12km in length and encircled by moat 100m wide. The city has five monumental gates, one each in the north, west and south walls and two in the east wall. In front of each gate stand giant statues of 54 gods (to the left of the causeway) and 54 demons (to the right of the causeway), a motif taken from the story of the Churning of the Ocean of Milk illustrated in the famous bas-relief at Angkor Wat.

In the center of the walled enclosure are the city’s most important monuments, including the Bayon, the Baphuon, the Royal Enclosure, Phimeanakas and the Terrace of Elephants.

The Bayon is a well-known and richly decorated Khmer temple at Angkor in Cambodia. Built at the center in the late 12th century or early 13th century as the official state temple of the Mahayana Buddhist King Jayavarman VII, the Bayon stands at the centre of Jayavarman's capital, Angkor Thom. It is the only Angkorian state temple to be built primarily as a Mahayana Buddhist shrine dedicated to the Buddha. It was modified and augmented by later Hindu and Theravada Buddhist kings in accordance to their religious preferences after king Jayavarman’s death.

Bayon is one of the most widely recognized temples in Siem Reap because of the multitude of serene and massive stone faces on many of the temple’s towers which jut out from the upper terrace and cluster around its central peak. There are 54 towers of four faces each, totaling 216 faces. The similarity of the 216 gigantic faces to other statues of Jayavarman VII has led many scholars to has led many scholars to the conclusion that the faces are representations of the king himself but others believe that the faces belong to Avalokitesvara, the bodhisattva of compassion.

Bayon's plan can be divided into three levels — the first two are bas-reliefs and the uppermost consists of the central sanctuary. The outer gallery depicts scenes from everyday life and historical events, while the second inner gallery depicts mythical figures and stories. This is one of the many ‘must visit’ temples. 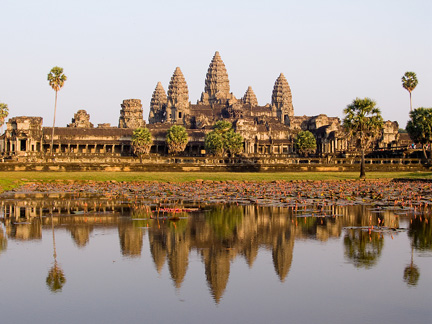